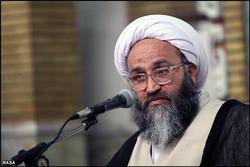 The member of the Assembly of Experts, saying that Muslims’ broader participation in Quds Day March will frustrate the Deal of the Century, called this march as a crushing blow to the foundations of the Zionist Regime.

RNA - Ayatollah Mohsen Haydari, the representative of Khuzestan people to the Assembly of Experts, talking to Rasa News Agency, said, “Imam Khomeini determined the final Friday of the month of Ramadan as the Day of Quds with the purpose of the formation of the Resistance Front against the world arrogance and the International Zionism.”

He continued, “The Day of Quds unites the Islamic Uma against the arrogance and Zionism, as they did so in the fight against the ISIS and plots of the US and Israel.”

“Now Palestine is more than a slogan, today the Islamists and the Resistance Front are in the front line of the endeavors pursued for the liberation of Palestine and holy Quds. The Quds Day is the day of Islam, as the supreme leader, following Imam Khomeini, has set Quds as the symbol of Islamic Jihad and Resistance”, he maintained.

Finally, Ayatollah Haydari said, “Muslims’ broader participation in Quds Day March will frustrate the “Deal of the Century”, Muslims are all supposed to participate in this March, as it acts a crushing blow the foundations of the Zionist Regime and pave the path of the liberation of the holy Quds.”