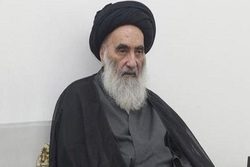 Iraq’s top Shia cleric Ayatollah Ali al-Sistani has strongly condemned lynching of a 16-year-old teenager by a group of protesters in Baghdad’s Al Wathba Square, warning about the consequences of such brutality.

RNA - In a statement read out by his representative during a sermon on Friday, Ayatollah Sistani said the recurrence of such crimes will impact the stability of Iraq and peaceful demonstrations in the country.

The top cleric expressed regret that a huge crowd of people stood idly by and just watched and even participated in the heinous crime. He called for the punishment of those behind the violence.

“The gruesome murder and hanging of the victim is a crime whose perpetrators must be held accountable,” Ayatollah Sistani said.

On Thursday, a group of “protesters” in Baghdad stabbed into death and cut the throat of Haitham Ali Ismael before hanging him by his ankles.

The boy had been berating the protesters for three days for obstructing the street beside his house and making noise, but he had been largely ignored.

Witnesses said he climbed up onto the roof of his house on Thursday and began shooting in the air with a pistol in order to shoo the protesters away from his family’s home.

That prompted a mob of protesters to barge into his small house at the edge of the Al Wathba Square where Haitham lived with his mother and stabbed him for 17 times.

Then they took him outside, pulled off his clothes, dragged him bleeding through the streets, hung him by his ankles from a traffic light pole and cut his throat.

In his Friday statement, Ayatollah Sistani once again urged anti-government protesters to reject acts of violence.

“We stress the peaceful nature of the demonstrations and condemn murder and kidnapping,” he said.

The top cleric also noted that the lynching of the Iraqi teenager and similar incidents once again proved that only government forces should have the right to possess weapons.

Alarm bells have started to ring for Iraq where a series of suspicious events, including unknown assailants machine-gunning protesters in Baghdad and a drone targeting an anti-US cleric, have raised fears of the country slipping deeper into violence and chaos.

Last Friday, armed men emerged from cars overnight, opening fire on protesters and killing at least 25 people who were in a building where many supporters of Muqtada al-Sadr gathered to stage demonstrations.

Sources said nearly 130 others were wounded by gunfire and stabbings which targeted protesters at the Sinak bridge near Tahrir Square. At least three of the dead were policemen.

The demonstrators called on the Iraqi military to intervene, but some soldiers were attacked when they arrived, adding to the confusion and forcing them to retreat.

No one has claimed responsibility for the lethal assaults, which have been rare since the protests began more than two months ago, but such assaults bear all the hallmarks of Takfiri terrorist groups.

According to Press TV, the US was quick to implicate Hashd al-Sha'abi, a combination of some 40 groups of mostly Shia fighters as well as Sunnis and Christians, which are currently integrated into the regular armed forces.

Hashd al-Sha'abi sources have said the US was allowing Daesh to roam freely under its watch in Iraq’s western Anbar province.