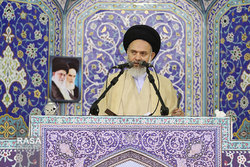 Qom Friday prayer leader said, “The enemy has invested on the psychological warfare using the cyberspace and media and it hopes to destroy the relationship of the society and the Islamic system.”

RNA - Ayatollah Husseini Busheri, delivering the sermons of the Friday prayer, stressing the maximum use of the pure opportunities provided by the month of Ramadan, said, “This month is wholly an invaluable opportunity for the man, and we all are required to observe the limits and obligations in this month.”

He then pointed to the recent visit made by the officials of the system to the supreme leader of the revolution and then reiterated, “The US, the arrogant powers and heresy front, the enemies of the Iranian people, have entered the field of battle against Iran employing all their powers and means in order to hit the system.”

The secretary of the supreme council of the seminaries said, “In addition to the economic power, the enemy has invested on the psychological warfare using the cyberspace and the media, they hope their sanctions will be effective destroying the relations of the society with the Islamic system and rising the people against the system.”

Ayatollah Husseini Bushehri continued, “The economy of the estate suffers from a chronic disease, it should be cured through following the instructions of the supreme leader of the revolution, the employment of the Jihadi forces, removal of the brokers, changing the form and basis of the oil-dependent economy, improvement of the business environment, resolving the banking and financial problems.”

He finally stressed, “There is only two options before us in the face of the enemies, either resistance or surrender. The supreme leader of the revolution has said that the will of the Iranian people will win this war. The gossips shouldn’t be let distribute on the cyberspace and in the society.”