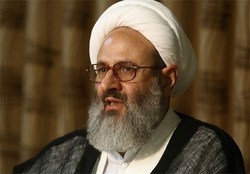 The member of Qom Seminary’s society of teachers, saying that we shouldn't trust the enemies, mentioned that they fulfill none of their commitments.

RNA - Ayatollah Mohsen Faqihi, the member of Qom Seminary’s society of teachers, in his seventh session on Quran interpretation, held in Salamsi mosque of Qom, interpreting the verse no. 75 of Baqara Surah, said, “the Israelites was a highly stubborn and obstinate group, and despite observing the Heavenly signs, they committed acts of heresy regarding the facts”.

“They modified the words of truth upon hearing them, and interpreted the Heavenly words due to their own benefits and interests, and it is an ugly attribute of the Israelites”, he added.

Ayatollah Faqihi continued, “If a group deny the fact despite being informed of it, they can’t be directed into the straight path. And if the scholars and elites of a nation do so, they will ruin their own nation.”

The member of Qom Seminary’s society of teachers, pointing to the links between some people and the enemies, said, “Their penitence won’t be accepted by God. We can trust neither in the hypocrites nor in the infidels, as the enemies won’t perform any of their commitments.”

Finally, Ayatollah Faqihi said, “The man should always attempt to explore some new facts, and exercises whatever he finds. Society members, especially those of science, should put into practice what they have learnt, as God may forgive those ignorant, but those of knowledge, in case of willingly neglecting their own knowledge and committing the wrong intentionally, won’t be forgiven.”