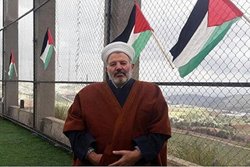 “Resistance Front is strong enough to provide a firm response to the Israeli aggression”, The head of the Palestinian Islamic delegation said.

“Resistance Front is strong enough to provide a firm response to the Israeli aggression”, The head of the Palestinian Islamic delegation said in an interview with RNA international correspondent.

Stating that Israel would not hesitate to exterminate Muslims, Sheikh Saeed Qassem, Palestinian Islamic leader, described the Zionist occupation regime as a sworn enemy of the Islamic Ummah.

Pointing to the martyrdom of ‘Baha Abu al-Ata’, one of the Palestinian Islamic Jihad Movement leaders by Israel, he said, “Martyrdom is an honor for us, and we have no fear of it. The Islamic Jihad movement guarantees resistance in Palestine.”

“Tel Aviv leaders do not tolerate any movement from the Resistance Front, so they use every means possible to strike it”, Sheikh Saeed Qassem said.

He called Benjamin Netanyahu the Israeli PM as a coward person, and states, “So far, the Palestinian Islamic Jihad Movement has not been silent on Israeli aggressions and by pouring of missiles to Tel Aviv it has sent a message to the Benjamin Netanyahu, Prime Minister of the Zionist occupation regime that if our lands are invaded, we will give you a firm and overwhelming answer.”