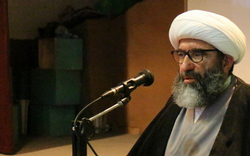 According to the correspondent of Rasa News Agency in the holy city of Najaf, Sheikh Sayfi Mazandarani, a teacher of Najaf Seminary, speaking in the open session held in Ayatollah Yaqubi’s office, stated, “The science of Principles employed for interpreting the contemporary jurisprudence (Fiqh), is composed of three components, and its first data-x-items is Imam Khomeini’s scientific innovation covering some dos and don’ts introduced as some laws.”

Sheikh Sayfi Mazandarani reiterated, “Its second item is the practical behaviour of the wise, and the third item is the vacuum point that is presented and filled by the guardianship of the Islamic Jurist, and as the Jurist is a Heavenly guardian, his order must be followed by all, including jurisprudents.”