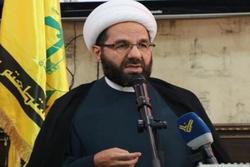 Hujjat al-Islam Sheikh Ali Daamoush, the vice-chairman of the Lebanese Hezbollah’s Executive Council maintained, “Hezbollah’s recourse to the Resistance is its religious and legal right.”

RNA - Hujjat al-Islam Sheikh Ali Daamoush, the vice-chairman of Hezbollah’s Executive Council, delivering the sermons of this week Friday prayer, commemorated the victory of Hezbollah over the Zionist Regime in 2006, and said, “It was an intense war struck by Israel. Though the enemy employed all its equipment and tools, it lost the battle and was repelled.”

He added, “Bravery, resistance, sacrifice, patience, vigilance, stability and people’s recourse to the triangle of the army, nation and the Resistance Front all contributed to that superb victory over the seizing Zionist Regime.”

Hujjat al-Islam Daamoush stressing that resistance is a religious, national, legal, moral and human right that won’t be put aside by Hezbollah in any situation, maintained, “Hezbollah makes recourse to the Resistance Front as it seeks to protect Lebanon and its people”.

It should be noted that the Israeli army, striking a 33-day war, attacked Lebanon and Hezbollah in 2006, however, it lost the war and was repelled.