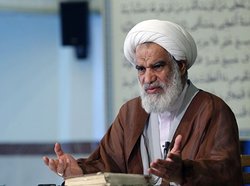 ‎‎RNA – In an exclusive interview with Rasa News Agency, Ayatollah Abbas Ka’bi, the ‎‎representative of the people of Khuzestan province in the Assembly of Experts, ‎criticized the ‎marginalization of the arrival of the Islamic Resistance Forces to help the flood victims in ‎Iran and emphasized, “No military force had entered Iran but rather the Popular Mobilization ‎Forces, the Harakat Hezbollah al-Nujaba and the Islamic Resistance of Iraq have been ‎present in the form of relief and service forces to the Iranian people, the Red Crescent and ‎the popular camps in the country.”‎
‎ ‎
The member of the Society of Seminary Teachers of Qom ‎added that the presence of the ‎Islamic Resistance Forces was in the framework of humanitarian law and the four treaties of ‎the Geneva Conventions and isn’t only legitimate internationally in the face of floods and ‎natural disasters but also in times of wars. ‎

‎“Any restrictions and barriers to the prevention of humanitarian relief is considered as a crime ‎against humanity,” he added.‎

No normalization of ties with Israel without Palestinian state