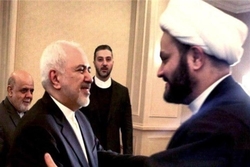 Iranian Foreign Minister Mohammad Javad Zarif, in a meeting with Secretary General of al-Nujaba Movement Sheikh Akram al-Kaabi, reassured that Tehran is determined to expand bilateral relations with Baghdad in all areas, specially in security and economic areas.

RNA - Zarif and al-Kaabi met in Baghdad late on Monday and exchanged views on the regional issues and developments.

During the meeting, the two sides also discussed the latest developments of Iraq and some regional issues related to security areas.

Zarif and al-Kaabi also expressed satisfaction with strong relations between Iran and Iraq.

The Iraqi politician also touched upon some points on the political issues between the two countries.

Besides, he announced that al-Nujaba Movement is ready for economic cooperation with Iran.

Iranian foreign minister, stressing the full support of Iran for country, government, and the volition of the nation of Iran, pointed to the attempts of Tehran for developing bilateral relations with Baghdad in all areas.

Iranian Ambassador Iraj Masjedi and the diplomatic delegation accompanying the Iranian foreign minister were also present in the meeting which was held at the residence of Zarif in Baghdad.

The Iranian diplomatic chief arrived in Iraqi capital city of Baghdad on Sunday in the evening at the head of a large politico-economic delegation.

Addressing media upon arriving in Baghdad, Zarif said that he is slated to take part in 3 trade meetings in different cities of the Arab country.

He added that he would attend three trade meetings between the economic agents of Iranian and Iraqi private sectors in cities of Baghdad, Karbala and Sulaymaniyah.

Elsewhere, the Iranian foreign minister commended Iraq's positive stance on the promotion of ties with Iran, saying the two countries have managed to foil US bids to sabotage mutual relations.

The Iranian diplomatic chief praised the Iraqi government's positive stance on unilateral sanctions imposed by the United States against the Iranian nation and noted that he plans to hold talks with senior officials of the Arab country about ways to further boost cooperation.