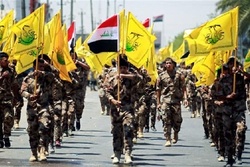 A member of the Islamic Action Society of Bahrain, saying that the secretary general of al-Nujaba has long been a thorn to the flesh of the US and its allies, pointed to the role of this movement in frustration of Washington’s plots.

RNA - The chairman of the Islamic Action Society of Bahrain, following the addition of al-Nujaba and its secretary general, Sheikh Akram al-Kaabi, to the SDN terrorists list of the US, stated, "this sanction is a medal of honour and dignity for those who have battled the world arrogant powers, headed by the sectarian, non-developed and autocratic regimes and terrorist-Takfiri-Wahhabi groups".

Mentioning that the US is the last government eligible to talk about terrorism, Dr al-Rashid pointed out, "the said country has founded its empire on millions of skulls of world nations using weapons and forced domination."

He added, "Washington is still applying it suppressing method that is based on support for murdering anti-humanity regimes and groups. Their vile positions towards Palestinians' massacre by Zionists, is only one evidence of their dance on the corpses and blood of the victims."

This revolutionary Bahraini leader described al-Nujaba a resistant and noble movement and mentioned, "The combatants of this Movement, along with other Iraqi Resistance groups, have targeted the American, English and Western occupiers; therefore it's no surprise that they have become a target for the sanctions of the US."

A;-Rashid added, "Al-Nujaba, commanded by Sheikh Akram al-Kaabi, have fought against the Wahhabi terrorism and the ISIS, supported by Washington, in Iraq and Syria, and frustrated the plots and plans of the US, Israel, UK and other colonizing Western regimes for creation of a New Middle East, devised after the termination of Sykes–Picot Agreement, for "the maximum division of region's countries."

Finally, announcing the full support of the Bahraini Resistance for al-Nujaba and Sheikh Akram al-Kaabi, he pointed out, “All should know that this Movement and its secretary general will remain to be a thorn in the side of the US and its Western-Arab allies.”