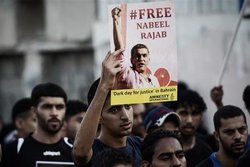 A court in Bahrain has rejected a motion filed by lawyers of prominent opposition figure and pro-democracy campaigner Nabeel Rajab, which asked for an alternative punishment to the jail term he is currently serving.

Jishi added that the motion was filed on April 30 in a bid to benefit from Bahrain’s so-called ‘alternative punishment law.’

The law, which was introduced in May 2018, allows Bahraini courts to convert jail terms into non-custodial sentences if the court determines that the defendant will not commit a ‘crime’ in the future.

The law is reportedly aimed at easing congestion in Bahrain’s prisons, where overcrowding is commonplace.

On February 21 last year, Bahrain’s criminal court sentenced Rajab to five years in prison for tweeting in 2015 about torture in Jaw Prison and censuring the Saudi-led war on Yemen.

According to a court document, the distinguished human rights activist was found guilty of “spreading false news and rumors in time of war,” “insulting foreign countries” and “insulting publicly the interior ministry” in comments posted on Twitter.

Bahrain’s Court of Cassation, which has the ultimate say in the case of appeals in the country, had also upheld a two-year jail sentence against Rajab on January 15, 2018.

Rajab faces a further 15 years in prison over a separate set of charges related to his criticism of the ruling Al Khalifah family and Wahhabism.

On December 22, 2016, Bahraini authorities accused Rajab of making comments that “harm the interests” of the Manama regime and other Persian Gulf kingdoms through an article attributed to him and published by French daily Le Monde.

The article slammed the Takfiri terrorist group of Daesh for its crimes against humanity. It also condemned Persian Gulf Arab countries for their failure to stop the spread of the violent Wahhabi ideology.

Wahhabism, the radical ideology dominating Saudi Arabia and freely preached by its clerics, fuels the ideological engine of terror organizations such as Daesh and Fateh al-Sham, al-Qaeda's Syrian branch formerly known as al-Nusra Front. Takfiri terrorists use the ideology to declare people of other faiths “infidels,” justifying the killing of their victims.