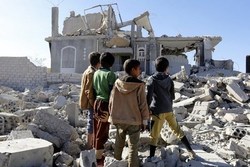 The United Nations has confirmed that Yemen's Ansarullah resistance forces have begun their withdrawal from three Red Sea ports a good-will move to ensure relief aid to the poor and war-ravaged people.

RNA - The pullout is yet another goodwill gesture on the part of the resistance and its allies to prove to the international community that there is no military solution to the US-backed, Saudi-led conflict in the poorest country in the Arab world. It also shows that the main concern for the resistance is now humanitarian aid and dialogue, and not politics or gaming international humanitarian law.

UN teams are overseeing the Ansarullah redeployment in Saleef, used for grain, as other teams are in the second port of Ras Isa, used for oil, to implement the withdrawal. The resistance pullback is a first step in implementing a hard-won ceasefire deal, the Stockholm Agreement, reached between Yemen's pro-Saudi forces and the Ansarullah forces late last year in Sweden.

According to the Ansarullah officials, the ports were handed over to coastguard personnel who are now in charge. However, leaders of Saudi-backed forces still claim the pullout is “a flagrant show”. They go on to claim that “it's an attempt to misinform the international community ahead of a meeting of the UN Security Council.”

These statements speak for themselves. The Saudis and their allies are still not ready for dialogue and peace, despite UN warning that the country is in urgent need of international humanitarian aid. Hodeida, the fourth-largest city in Yemen and its port plays a crucial role in allowing food to be imported into the country. The UN has wanted to place the port under its control due to the humanitarian crisis caused by the conflict and that’s precisely why the Ansarullah forces decided to withdraw.

More than 70,000 people have been killed since January 2016, according to the Armed Conflict and Location Event Data Project (ACLED), a database tracking violence in the country. The US-backed war on Yemen has been at a stalemate for years, with the Saudi-led coalition and Yemeni forces unable to take over the capital Sanaa from the Ansarullah forces.

ACLED has recorded 3,155 direct Saudi-led attacks that targeted civilians and the UN figures also show that 30 percent of the civilians were either killed and wounded inside their homes, with non-combatants also targeted when traveling on roads, working on farms and at other civilian sites.

Thankfully, the number of deaths has dropped significantly in Hodeida due to the ceasefire agreement reached between the warring parties. The Stockholm Agreement lay the groundwork for peace which brought agreements on the exchange of prisoners, a truce in the vital port city of Hodeida, the establishment of humanitarian corridors in war-torn Taiz, and a handover of the three Red Sea ports (Hodeida, Al-Salif, and Ras Isa) to the UN.

The withdrawal should now make sure humanitarian aid could be delivered to millions of civilians who are still trapped in war-torn regions of the country and in dire need of food and medical assistance.

According to Fars News Agancy, Sadly enough, the same cannot be said about the Saudis, their coalition and the United States. After President Donald Trump’s veto of the War Powers Act demand by Congress to end the illegal Yemen war, a new report from the UN Development Program says the war has also set back the poorest country in the Middle East many years. Further still, according to a new World Health Organization report, in 2018, there were more than 1.1 million cholera cases in Yemen. At least 2,310 people died from the disease, most of them children.

The Saudis and their allies should stop gaming the international humanitarian law in Yemen. The Ansarullah resistance movement’s decision to withdraw from the key humanitarian corridors leaves no more excuses for the Saudi-led coalition to justify the military aggression. The UN should confront and correct their deliberate mistakes. The Saudis and their allies shouldn’t be allowed to rebrand their failed campaign to prolong the unnecessary war and blockade.

The time is now for the UN and the international civil society to force the Saudis and their coalition partners to stop their campaign to ravish Yemen and reject any glorification of this immoral violence. Just like the people of Yemen, the world community should also support the Ansarullah and appreciate its decision to withdraw from a highly strategic position to ensure relief aid to the poor and war-stricken people. The continuation of the current political process could only be ensured if the ceasefire agreement in Hodeida and the delivery of humanitarian aid are observed by all parties involved.