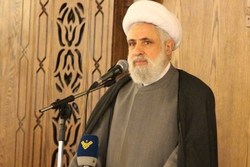 The deputy secretary general of Lebanon’s Hezbollah resistance movement has described Saudi Arabia as the root cause of instability in the Middle East, stating that the incumbent regime in Riyadh is sponsoring fiendish US and Israeli crimes in the region.

RNA - “Saudi officials are paying for American-Zionist crimes from the pockets of poor and impoverished people among other walks of society in the kingdom. Saudi rulers have turned the country into the kingdom of evil. Saudi money rests behind all crises and problems in the region, besides the agents that are on the American-Israeli side,” Arabic-language al-Ahed news website quoted Sheikh Naim Qassim as saying at a ceremony in the southern Lebanese town of Kfar Fila on Sunday evening.

Qassim added that the ruling Saudi family is a sheer example of an oppressive and dictatorial regime, which practices all kinds of pressure and injustice under American orders to legitimize Arabs’ normalization of diplomatic relations with the Israeli regime, the so-called deal of the century that deprives Palestinians of their motherland and their future, in addition to aggression and occupation.

“Saudi Arabia committed a massacre by executing a number of its citizens without a fair trial and through false confessions. The individuals were charged only because of expressing their views and speaking truth. This is only part of the crimes the Al Saud regime, which has also killed (Shia cleric) Sheikh Nimr Baqir al-Nimr and (renowned journalist) Jamal Khashoggi, and destroyed life in Yemen for more than four years without being penalized,” the senior Hezbollah official pointed out.“The Al Saud is the one who destroyed Syria, introduced (the radical ideology of) Wahhabism, dispatched al-Qaeda, Nusra and their terrorist allies to Iraq, Syria, Lebanon and elsewhere in the Middle East region, and provoked sectarian strife. They are the ones who are sabotaging Libya, Sudan and Algeria. This regime is preventing stability in the region,” Qassim commented.

He highlighted that Riyadh has the least respect for the standards of human rights and grossly distorts Islamic teachings.