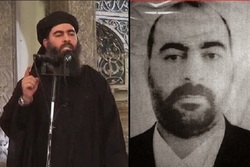 An Iraqi intelligence official says the leader of the terrorist group of Daesh, Ibrahim al-Samarrai aka Abu Bakr al-Baghdadi, had attempted over the past few weeks to cross Syria into Iraq’s western province of Anbar, but failed to do so due to tight security measures along the border between the two countries.

The official further noted that Baghdadi had been trying to enter Iraq for weeks, but could not succeed as strict security measures were being applied on the Iraqi-Syrian border.

He highlighted that the Daesh leader was now supported by a small number of close aides, who were mostly of Saudi, Tunisian and Iraqi origins.

The murder of a large number of Daesh terrorists in Syria and the subsequent elimination of the terror group's so-called caliphate “prompted Baghdadi to seek return to Iraq,” the source pointed out.

On April 3, Iraqi military aircraft dropped leaflets over desert areas in Anbar province, offering a reward of millions of dollars for intelligence that would lead to Baghdadi’s capture.

The planes dropped the leaflets over Upper Euphrates towns, Bedouin encampments, and villages adjacent to the borders with Syria, Jordan and Saudi Arabia.

“The leader of Daesh and his fighters stole your land and killed your people, and now he is hiding in safety away from the death and destruction that he planted. With your intelligence reports, you can avenge,” the leaflets read.

According to Press TV, they carried pictures of Baghdadi and a promise of a reward of 25 million US dollars for anyone, who provided information leading to the arrest of Baghdadi. The leaflets also provided two hot lines on WhatsApp messenger.

The former Iraqi prime minister, Haider al-Abadi, declared the end of military operations against Daesh in the country on December 9, 2017.

On July 10 that year, he had formally declared victory over Daesh in the strategic northern city of Mosul, which served as the terrorists’ main urban stronghold in Iraq.

In the run-up to Mosul's liberation, Iraqi army soldiers and voluntary fighters from the pro-government Popular Mobilization Units (PMU) – better known by the Arabic name Hashd al-Sha’abi – had made sweeping gains against Daesh.

Iraq will be no starting point for action against neighbors, Salih assures Iran