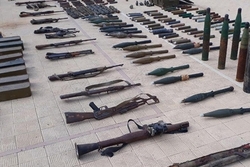 The Syrian army discovered a cache of arms and military equipment, including US and West-made weapons, during cleansing operations against remnants of ISIL terrorists in Deir Ezzur province and Eastern Damascus.

RNA - The Syrian army's engineering units on Thursday found weapons and equipment, including machine-guns, RPGs, missiles, different types of guns, West-made grenades and US-made anti-tank missiles in purging operations in the town of Arabayn and al-Zamir region in the Eastern Ghouta of Damascus.

The Syrian army discovered a cache of arms and military equipment, including US and West-made weapons, during cleansing operations against remnants of ISIL terrorists in Deir Ezzur province and Eastern Damascus.

The engineering units of the Syrian army on Thursday found weapons and equipment, including machine-guns, RPGs, missiles, different types of guns, West-made grenades and US-made anti-tank missiles in purging operations in the town of Arabayn and al-Zamir region in the Eastern Ghouta of Damascus.

Meantime, a field source in Eastern Syria reported that the Syrian army purged the ISIL terrorists during operations from Panaroma square at the Southern entrance of Deir Ezzur city to Talat Um Aboud region near the international Deir Ezzur-Palmyra road.

He added that the Syrian army forces defused and detonated a large number of anti-personnel and anti-tank mines, including the US-made ones, left behind by the ISIL terrorists.

The US, Israel and other western states have helped the terrorist groups in Syria logistically and financially.

This is not the first time that the West's footprints are found in the terrorists' strongholds in Syria.

Heavy clashes were reported between Tahrir al-Sham al-Hay'at (the Levant Liberation Board or the Al-Nusra Front) and Ankara-backed Ahrar al-Sham terrorist groups in Northern Hama.

Dissident sources were quoted by the Arabic-language al-Watan newspaper as saying on Thursday that Tahrir al-Sham has sent a large number of military equipment to regions occupied by Ahrar al-Sham in the towns of Ariha, Ma'arat al-No'aman and Qalat al-Maziq with the aim of taking full control of Idlib province.

They added that Tahrir al-Sham is now in control of 90% of Idlib province and adjacent areas in Hama and Lattakia, saying that it will likely take full control of the demilitarized zone designated by the Sochi Agreement between Russia and Turkey.

Meantime, the Syrian army targeted the militants' movements from the town of al-Janabareh in Northern Hama and al-Tamane'ah in Southern Idlib with artillery and missile attacks after their continued offensives from the demilitarized zone, fully annihilating two terrorist groups.

Other reports also said that the terrorist groups in Northern Aleppo launched missile strikes on the residential areas in the town of al-Zahra in Western Aleppo.

A mass grave of over 20 victims of the ISIL terrorist group was discovered in Eastern Deir Ezzur.

They added that corpses of 23 civilians, including a number of women, were found from the mass grave, noting that they had been executed by the ISIL when the town was under the terrorist group's occupation.

Corpses of civilians killed by the ISIL or the US airstrikes are found in the two Eastern provinces of Raqqa and Deir Ezzur nearly on a daily basis.

The British Army has formed a new armed brigade of terrorists in al-Tanf region in Eastern Syria, media reports said.

According to Fars News Agancy, the Arabic-language service of Sputnik news agency quoted member of the joint Russian-Syrian coordination committee for the return of refugees Ahmad Monir Mohammad as saying on Wednesday that the British Army has hired over 400 terrorists in the past 4 months, paying them monthly salaries, adding that the measure has been adopted in line with plots hatched by the international coalition led by the US.

Meantime, the Arabic-language SANA news agency reported that tens of new families have succeeded in fleeing from al-Rukban camp in al-Tanf region which is controlled by the US forces and terrorists supported by Washington, passing through Syrian army-controlled areas towards Jaliqam corridor in Badiyeh (desert) region in the Eastern parts of Zaza region in Eastern Homs.

Hundreds of people fled and a number of others have so far been killed in the ill-famed al-Rukban refugee camp in al-Tanf region of Homs which has been occupied by the US and its affiliated militants at the borders with Iraq.

A suicide attack against a US military convoy in Southern Hasaka left 2 American Army terrorists killed and wounded.

The Kurdish-language Hawar News reported that a bomb-laden car was detonated near the US military convoy in al-Shadadi region in Southern Hasaka on Tuesday afternoon, killing the suicide bomber.

But, other reports, including the Arabic-language Bass News, affiliated to the Kurds, reported on Wednesday that one of the US forces has also been wounded in the attack.

Meantime, MENA quoted unconfirmed reports as saying that a US soldier was killed and another was wounded during the suicide blast.

The source said that concurrent with the attack, the Kurdish fighters arrested a number of civilians in the village of al-Aziziyeh in the Western parts of Ra'as al-Ain in Northern Hasaka after creating horror among people by firing bullets.

The US army is no more welcomed in the region and attacks against them have increased recently.