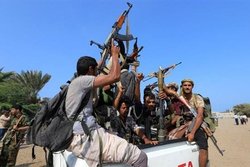 RNA - On Sunday, Yemeni forces gained control of the villages of Beit Sharji and al-Adhab, located northwest of the district of Qatabah,  following fierce exchanges of gunfire with Saudi-backed troops there, the media bureau of Yemen’s Operations Command reported.

Yemen’s al-Masirah television network also quoted a military source as saying on Monday that Yemeni troops had targeted several Saudi positions in the border regions of Jizan, Najran and Asir overnight, killing or wounding an unspecified number of them.

They also staged an ambush against Saudi-paid militants in the al-Rabu’ah military base of Asir.

They fired domestically-manufactured Zelzal (Earthquake)-1 ballistic missiles at the gatherings of Saudi mercenaries in Najran's al-Baqa'a desert as well as al-Fariza military base in Jizan, inflicting human and material losses on them.

Saudi Arabia and a number of its regional allies launched a devastating military campaign against Yemen in March 2015, with the aim of bringing the government of Hadi back to power and crushing Houthis.

According to new figures from the United Nations, the Saudi war in Yemen will have claimed about 102,000 lives by the end of 2019, indicating that the invasion has killed far more people than previously reported.

The UN-commissioned report by University of Denver also revealed that more Yemenis are dying of hunger, disease and the lack of health clinics and other infrastructure, London-based Middle East Eye reported.

The 68-page study, called Assessing the Impact of War on Development in Yemen, showed that about 131,000 more Yemenis will have died from the side effects of the conflict between the start of 2015 and the end of 2019.

The combined death toll from war and disease is 233,000, or 0.8 percent of Yemen's 30 million-strong population. Researchers also said thatfive years of war will have cost Yemen’s economy $89 billion.

According to Jonathan Moyer, an assistant professor and lead author on the report, the vast majority of the victims are children under five.

The report said that one child dies from the war and its side effects every 11 minutes and 54 seconds.

"It's one of the highest-impact internal conflicts since the end of the Cold War. On par with Iraq, Sierra Leone, Liberia, and the Democratic Republic of Congo - conflicts with an impact on development that lasts for a generation."