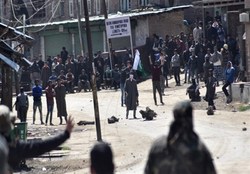 Hundreds took to the streets of Kashmir on Sunday night to protest at Saudi Arabia's mass execution of tens of Shiite people.

RNA - The Kashmiri people, Shiites and Sunnis, poured to the streets despite heavy security measures to condemn Riyadh's crimes against Muslims.

They chanted slogans against the al-Saud and the US and lighted candles to commemorate the people executed by Riyadh.

The protestors asked the international bodies not to allow Saudi Arabia to execute innocent people under different pretexts, saying that they had only protested at Riyadh's policies.

They also underlined that Saudi Arabia is a promotor of extremism and terrorist groups, including al-Qaeda and ISIL, in the region.

Last week, Saudi Arabia's Interior Ministry announced that it has executed 37 people in a single day “in connection with terrorism crimes”, as a crackdown led by Crown Prince Mohammad bin Salman against pro-democracy campaigners, human rights activists and intellectuals widens in the kingdom.

Human rights groups have said that nearly all of the Saudi citizens beheaded on Tuesday were Shiite, with one of the men's body put on public display after his death.

According to data released by the SPA, at least 100 people have been executed in Saudi Arabia since the beginning of this year.

The oil-rich (Persian) Gulf state is ranked among the top five executioners in the world, and according to Amnesty International carried out the death sentences of 149 people last year.

Indian-Controlled Kashmir Under Security Lock down

Hujjat al-Islam al-Musawi al-Safawi:‎ Problems will worsen in event of war between India and Pakistan

Celebration of the birth anniversary of Lady Fatimah al-Zahra held in Kargil, India

The Pulwama attack was Modi’s 9/11‎