Celebration of the birth anniversary of Lady Fatimah al-Zahra held in Kargil, India 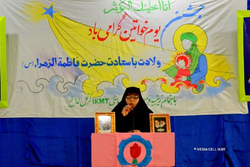 Rasa – Basij-e Zaynabiyyah, the women’s wing of the Imam Khomeyni Memorial Trust in ‎Kargil, ‎organised a program celebrating the birth anniversary of Lady Fatimah al-Zahra in ‎Kargil, in Indian-occupied Jammu and Kashmir, on February 26th, ‎‎2019.‎

RNA – One of the revolutionary Kashmiri youth who has requested that we don’t mention his ‎name due to security reasons told Rasa News Agency that Basij-e Zaynabiyyah, the women’s ‎wing of the Imam Khomeyni Memorial Trust in Kargil organised a program celebrating the ‎birth anniversary of Lady Fatimah al-Zahra, the daughter of the Prophet Muhammad, at the ‎Basij-e Zaynabiyyah’s office in Kargil‎, Indian-occupied Jammu and Kashmir, ‎on February 26th.‎

The program began with the recitation of Holy Quran by Nehzat Fatimah of Goma, Kargil ‎and taranahs (songs) and na’ats (poetry in praise of the Prophet Muhammad) were also ‎recited during the event by the students of Central Dar al-Quran Zaynabiyyah and many ‎others. ‎

The speakers highlighted the unforgettable sacrifices made by Lady Fatimah al-Zahra for ‎humanity and the efforts she made for women to become an important part of the society ‎in the early era of Islam. ‎

‎“Lady Fatimah al-Zahra ‎played an important role to save the killing of baby girls during the ‎‎‘Age of Ignorance’ and during the era time when Islam was fist introduced by the Prophet ‎Muhammad,” it was said.‎

One of the speakers explained, “This is why we are now celebrating the birth anniversary of ‎Lady Fatimah al-Zahra as Women’s Day and Mother’s Day. It because of her contributions ‎that women have become an important part of every society and now and are considered ‎as respectful creations of God.”‎

He added, “Previously, women were considered as slaves and they were treated as animals. ‎It’s due to the mercy of God that we are living in the era of Wilayat al-Faqih [Guardianship of ‎the Jurisprudent] which is guiding us how to spend our life as human beings.”‎