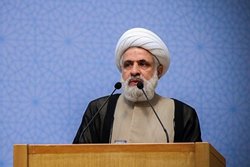 Rasa – Hujjat al-Islam ‎Na’im Qasim said that all the problems in the Middle East eventually end in ‎Saudi money.‎

RNA – Speaking during a mourning ceremony in southern Lebanon, Hujjat al-Islam ‎Na’im ‎Qasim, the deputy secretary-general of Lebanon’s Hezbollah ‎Islamic ‎‎‎Resistance ‎movement, ‎‎said‎ that the Saudi rulers have turned Saudi Arabia into a country of evil.‎
‎ ‎
The Lebanese Shi’ah cleric ‎emphasized that Saudi Arabia is paying off its crimes from the ‎pockets of the poor and the people of Saudi Arabia and “all the problems in the region end ‎in Saudi money and the tools that are at the disposal of the United States and Israel.”‎
‎ ‎
Hujjat al-Islam ‎Qasim described the Saudi rulers as the manifestation of a system of ‎oppressive dictatorship which has employed various types of oppression and pressure to ‎normalize relations with Israel on the command of the United States.‎

His Eminence also said that the House of Saud is taking steps to implement the “Deal of the ‎Century” and depriving the Palestinian people of their land and their future as well as ‎legitimizing Israel.‎

He noted that Saudi Arabia committed a massacre by executing a number of its citizens ‎without a fair trial and fabricating forced confessions, accusing them having violated the ‎country’s political system when they speaking the truth‎ and added, “This is only one of the ‎crimes of the House of Saud rulers who martyred the Shi’ah scholar, Ayatollah Nimr Baqir al-‎Nimr, murdered journalist Jamal Khashoqji and has been bombing Yemen for more than four ‎years without batting an eyelid.”‎

Hujjat al-Islam ‎Qasim ‎said, “The House of Saud are the ones who destroyed Syria and led ‎the Wahhabis, al-Qaedah, the al-Nusrah Front and their terrorist allies into Iraq, Syria, ‎Lebanon and other countries in the region and provoked sectarian strife. They are the ones ‎who are sabotaging Libya, Sudan and Algeria. This regime is preventing the establishment of ‎stability in the region. They created the tragic and negative situation in the region, gave birth ‎to sectarian strife and they lack even the lowest standards of human rights and violate the ‎teachings of Islam.”‎
‎ ‎
He ‎referred to the statements of Hujjat al-Islam Sayyid Hasan Nasrallah, the Secretary-‎General of Hezbollah and said that last week, Sayyid Nasrallah‎ said that Saudi Arabia and the ‎United Arab Emirates should be ashamed and said that for the United States, that which is ‎important is its interests and that Saudi Arabia and the United Arab Emirates ‎don’t have any ‎value for the United States and that this country’s objective is to besiege the neighbouring ‎countries of Saudi Arabia and the United Arab Emirates.‎