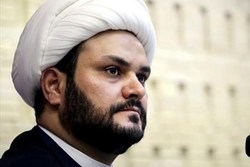 RNA – Hujjat al-Islam Akram al-Ka’bi, the secretary-general of Iraq’s Harakat Hezbollah al-‎Nujaba, one of the militias which is part of the Popular Mobilization Forces, described the ‎mass executions of Shi’ahs in Saudi Arabia as a “stain on the forehead” of the Saudi Wahhabi ‎regime, and said, “The execution of the scholars and youth from the al-Ahsa and Qatif, some ‎of whom had not reached the age for a legal trial, is nothing but a crime and a stain on the ‎forehead of the Saudi Wahhabi regime which has been added to the history of their crimes ‎against the followers of the Ahl al-Bayt.”‎
‎ ‎
The Saudi Interior Ministry said on May 3rd that 37 Saudi citizens were executed on charges ‎of “terrorist activities,” 34 of which belonged to the country’s Shi’ah minority.‎

These executions by the Saudi government have caused global and regional reactions. The ‎European Union, Amnesty International and the United Nations Commissioner for Human ‎Rights responded to these executions and some of them also condemned them. ‎