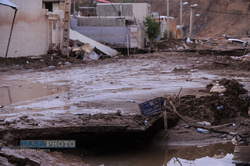 Rasa – Kashmiri women have donated their ‎valuable golden clothes and jewelry, including golden rings, necklaces and shirts that ‎they ‎were gifted by their parents and husbands upon their marriages.‎

RNA – In the face of the recent floods that hit many provinces in Iran, the majority of the humanitarian organizations in the world ‎remained completely silent and were unconcerned with the victims.

Moreover, the United ‎States blocked the humanitarian aid donated to the flood victims and it’s certain that many ‎American-dominated countries were forced to abide to the demands of the Trump ‎administration not to provide aid.‎
‎ ‎
However, the reaction from the common people of Kashmir was the complete opposite. ‎Although, the leaders who were in front row receiving aid from Iran in following the ‎September 2014 floods in Kashmir didn’t join the common people. ‎

Many NGOs, religious and humanitarian organizations based in Kashmir provided assistance ‎and started campaigns to send donations to the flood victims in Iran.‎
‎ ‎
Simultaneously, all the organizations in Kashmir who made efforts to assist the flood victims ‎were pleased to see a sudden and positive response from the people. People were ‎continuously asking for the ways that can send donations to the victims as soon as possible. ‎People went on social media platforms to find ways to send donations to the victims quickly. ‎
‎ ‎
The centuries-old humanitarian, religious, cultural, social, political and economic relationship ‎was seen through different acts from the Kashmir Valley. ‎

Very quickly, people donated what they thought could be of help to the victims. One of the ‎most mentionable spiritual acts was seen when many daughters of the Islamic Revolution, ‎who didn’t allow us to mention their names, donated their valuable golden clothes and ‎jewelry, including golden rings, necklaces and shirts that they were gifted by their parents ‎and husbands upon their marriages.‎

Traditionally, golden clothes and jewelry were given as gifts by parents and husband and are ‎considered the most valuable gifts and Kashmiri women are obliged to secure them. ‎Although, some may sell them if they face major hardships. This act has really revealed ‎the deep relationship, love and affection for the Islamic Revolution of Iran. ‎

This spiritual act didn’t only show us that women helped the flood victims but rather instilled ‎this impression. Are we ready to give our most valuable belongings away? When the imam ‎calls.‎

At least 70 people have been killed since March 19 in floods and extreme weather conditions ‎in various Iranian provinces, from north to south, following the heaviest downpours in the ‎country in at least a decade.‎