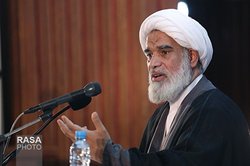 Rasa – A member of the board of directors of the Assembly of Experts said that ‎unfortunately, today the spiritual achievements of the Islamic Revolution are being ‎neglected.‎

RNA – Speaking at a ceremony commemorating the fortieth anniversary of Iran’s Islamic ‎Revolution at Qom’s Ma’soumieh Seminary, Ayatollah Abbas Ka’bi, a member of the board ‎of directors of the Assembly of Experts, stated that the Ma’soumieh Seminary is the link ‎between the seminary and university systems and are the point of the transformation in the ‎seminary and the Islamic system of government and said, “The late [founder of the Islamic ‎Revolution] Imam Khomeyni brought about the Islamic Revolution as a victory of victories ‎and the presence of the youthful and revolutionary believers came to the forefront with a ‎spirit of jihad and martyrdom. The presence of young people with a high education at ‎Ma’soumieh Seminary marks the realization of this goal of the Islamic Revolution.”‎

His Eminence added, “Today, it must be noted that the formation of a front of believers, ‎revolutionaries and educated people with a population of 8 to 10 million will solve all ‎problems and provide the grounds for an Islamic civilization. One of the important tasks of ‎the Islamic Seminaries is the training of such people.”‎

He noted, “We have made many advances in the scientific, medical, nuclear, stem cell and ‎nanotechnological fields. In other words, during the four decades that have passed since the ‎Islamic Revolution, we have been fighting against the plots, deception and deviousness of ‎the enemies and we have moved towards progress, development, prosperity and the ‎conquest of the peaks of progress.”‎