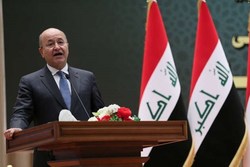 The top political brass in Baghdad hit at President Donald Trump after the US leader stated that he plans to keep troops in the country to spy on Iran, with President Barham Salih saying the mission does not have Baghdad's permission.

RNA - "The Iraqi constitution rejects the use of Iraq as a base for hitting or attacking a neighboring country," Salih said on Monday, adding that American forces were in the country under an agreement between the two countries, but that "any action taken outside this framework is unacceptable".

The Iraqi president insisted that the US president had not asked Baghdad's permission for US troops in Iraq to "watch Iran".

"Don't overburden Iraq with your own issues. The US is a major power ... but do not pursue your own policy priorities, we live here," Salih said, adding that "it is of fundamental interest for Iraq to have good relations with Iran" and other neighboring countries.

He stated that US forces were in Iraq to fight terrorism and that he looked forward to hearing Washington's clarification on the number of troops who were going to stay as well as their mission.

The reaction came a day after Trump told CBS that US troops would leave Syria and Afghanistan but stay on in Iraq, partly "to be looking a little bit at Iran".

The US president admitted that staying in Iraq is a “mistake” and that attacking Iran is not an option, but the remarks sparked a new round of demands in Baghdad for US forces to leave the country.

Trump defended his decision to end "endless wars" in Syria and Afghanistan by pulling out US troops from those countries. However, he stated that not all of thousands of American forces stationed in Iraq, specially at the Ain al-Asad Air Base in the Western Anbar Province, were going to return home.

“And one of the reasons I want to keep it (the base) is because I want to be looking a little bit at Iran because Iran is a real problem,” the American president noted.

Asked whether he wanted the troops there to “strike” Iran at a later time, Trump responded, “No… All I want to do is be able to watch.”

“We have an unbelievable and expensive military base built in Iraq. It’s perfectly situated for looking at all over different parts of the troubled Middle East rather than pulling up,” he added.

At present, approximately 5,200 US troops are currently based in Iraq. Spread out across several bases, the majority are based at either al Asad Airbase or in Erbil in Iraqi Kurdistan.

Trump announced in December that all American military troops in Syria would return home in the coming months while the number of US forces in Afghanistan would also be reduced drastically.

Trump made an unannounced stop at Ain al-Asad base on Christmas, in a visit that drew fire from Iraqi officials and their counterparts in Iran and other neighboring countries.

Sabah al-Saadi, a member of parliament in the bloc led by influential anti-American cleric Moqtada Sadr, has proposed a bill demanding a US pullout.

Deputy speaker of parliament Hassan Karim al-Kaabi, also close to Sadr, said Monday Trump's latest remarks have made passing such a law "a national duty" because they are a violation of Iraq's sovereignty and constitution.

The remarks, he added, are a "new provocation", weeks after the US president sparked outrage in Iraq by visiting US troops without meeting a single Iraqi official.

The Iraqi parliament, he stated, will soon pass a bill that will end the ongoing security agreement with Washington as well as the presence of all foreign forces in Iraq.

Kaabi asserted that his country would never become a launchpad for attacks or a US backyard for intelligence gathering against other countries.

Iraqi leaders say there are no American bases on its soil, stressing that only instructors are deployed at Iraqi bases.

Kurdish MP Sarkawt Shams tweeted that the mission of US troops in Iraq was "to help Iraqi security forces against terrorism, not 'watching' others."

"We are expecting the United States to respect our mutual interests and avoid pushing Iraq into a regional conflict," he said.

According to Fars News Agancy, Jaafar al-Husseini, a spokesman for the Iraqi pro-government Kata'ib Hezbollah voluntary forces, warned the Trump administration against mounting offensives against Iran and Syria from Iraq.

He also called on parliament to speed up legislation to drive out foreign forces, warning that the anti-terror force won't wait long.

In his interview on Sunday, Trump once again called the US war on Iraq as “one of the greatest mistakes” the United States had ever made.

He also defended his attacks on US intelligence assessments on Iran, saying they tend to miscalculate as they led former President George W. Bush into attacking Iraq by claiming that Baghdad had weapons of mass destruction (WMDs).

“President Bush had intel people that said Saddam Hussein in Iraq had nuclear weapons- had all sorts of weapons of mass destruction. Guess what? Those intel people didn't know what the hell they were doing, and they got us tied up in a war that we should have never been in,” he said.

Last Wednesday, Trump went on a twitter rant to attack his intelligence chiefs’ assessments on Iran’s growing power despite Washington’s pressure campaign following his pullout from the 2015 Iran nuclear deal.

The tweets came in response to Tuesday statements by CIA Director Gina Haspel and Director of National Intelligence Dan Coats before the US Senate Intelligence Committee.

Haspel told the panel that despite Trump’s decision last May to withdraw from the nuclear deal, the Islamic Republic had been “making some preparations that would increase their ability to take a step back”.

Coats also acknowledged that Tehran was not seeking to develop nuclear weapons capabilities.