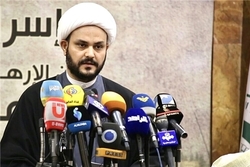 Secretary-general of Iraq's al-Nujaba popular movement underlined preparedness to give a strong response to any possible US attack on Iraqi forces.

RNA - "If the US targets the Iraqi forces, we will give them a crushing response. Our response will not merely be confined to missile attacks as they think but we will approach them so closely and will give them a surprising and proper response and God will help us," al-Ka'abi said in an interview with the Persian-language Ettela'at newspaper on Tuesday.

He also reminded of the Iraqi popular forces' assistance to the Syrian army in the fight against the terrorist groups, and said, "We have also declared to our brothers in Ansarullah (in Yemen) that we are ready to stand beside them on all humanitarian, military and other scenes."

Al-Ka'abi, meantime, expressed confidence that Ansarullah forces are themselves capable of defeating al-Saud, the US and the Zionists.

His remarks came after US President Donald Trump announced late last month of his decision to withdraw forces from Syria immediately.

But, later other US officials modified the position by saying that the pullout would be done under specific conditions. Also media reports said that the US is reinvigorating its bases in Western Iraq.

An informed source said on Saturday that a large number of state-of-the-art US-made weapons had been dispatched to Ein al-Assad airbase in al-Anbar province.

"A number of US military planes, carrying weapons and military equipment, arrived at Ein al-Assad airbase in al-Baghdadi region in the town of Hit in Western al-Ramadi. No reason has yet been cited for these flights to the airbase and the details about the weapons which are said to be advanced," the source was quoted as saying by Iraq's al-Wa'e news agency.

He added that a few days ago, a large number of US military vehicles had also arrived at Ein al-Assad, noting that the American forces take assistance from the security companies for transferring military equipment to their positions in Iraq and the military men are sent to different places on planes.

Iraq's Ein al-Assad airbase hosted US President Donald Trump on December 26 before the New Year. Trump underlined in his remarks that he did not intend to withdraw forces from Iraq at all.