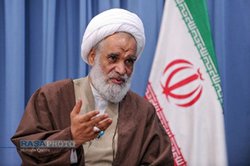 Ayatollah Ka’bi explained that zakat is a position and station to meet the demands of the ‎people and added, “Meeting the needs of the people means providing the grounds for ‎progress and the living standards of the people.”‎

RNA – Speaking on the “Zolal-e Ma’refat” program on Khuzestan’s provincial IRIB television ‎station on May 23rd, Ayatollah Abbas Ka’bi, a member of the Society of Seminary Teachers ‎of Qom, stated that Ramadhan is a month of blessing and movement, assistance, serving ‎the people, authority, development and the restoration of the authority of the Islamic and ‎added, “All Islamic teachings emphasize the creation of the necessary grounds for the ‎growth of production and employment and the provision of more wealth.”‎

The representative of the people of Khuzestan province in Assembly of Experts of the ‎Leadership added that gaining wealth is not against Islamic values, “Gaining wealth with a ‎production-oriented approach is a sacred value, and since work in Islam is worship, man’s ‎status and dignity depend on independent, productive and hard work.”‎

Ayatollah Ka’bi said, “The self-sufficiency and needlessness of a believer in working is ‎superior to the worship of the devotees and he who helps others with his hand is more ‎pious and closer to God.”‎

Ayatollah Ka’bi pointed out that creating jobs and solving the housing issues of the youth, ‎resolving family disputes and laying the groundwork for starting a family based on Islamic ‎teachings and Islamic law are among the best services to God’s people.‎