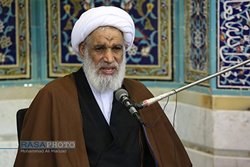 Ayatollah Ka’bi said, “The element of Imamate that had been diverted at the beginning of Islam in Saqifah returned to its original path with the victory of the Islamic Revolution.”

RNA – In a speech marking the beginning of the Ten-Day Dawn at the Holy Shrine of Lady Fatimah al-Ma’sumah in Qom, Ayatollah Abbas Ka’bi said, “The beginning of the 41st anniversary of the dawn of the victory of the Islamic Revolution coincided with the Days of Fatimah and the martyrdom of the Commander of the Resistance and the Commander of the Hearts [General Qasem Soleymani] and promises successive victories on the Front of Islam against the Front of Disbelief.”

The representative of the people of Khuzestan province in the Assembly of Experts added, “The formation of a monotheistic society based on the monotheism of Divine Lordship and the role of God in one’s personal and social life is the foundation and essence of the movement of all divine prophets.”

He noted, “After prophethood, the role of justice and Imamate is very important and influential because the system of justice is the executive body of religion and leads people toward a good life.”

Ayatollah Ka’bi said, “The path of the Umayyads is trying to move the recognition of God towards force and to free society from monotheism and justice but the Shi’ah school is known for its two principles of Imamate and justice because Imamate doesn’t belong to the past and in history but rather it belongs to the present and the future.”

He said, “The element of Imamate that had been diverted at the beginning of Islam in Saqifah returned to its original path with the victory of the Islamic Revolution.”

In other remarks, Ayatollah Ka’bi referred to Ayatollah Khomeyni’s return to Iran after a period of exile in France imposed by the Shah and said, “12 Bahman (1 February, 1979) is a great day in the history of Islam, the Islamic ummah and Islamic Iran.”