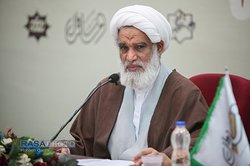 RNA – In an exclusive interview with Rasa News Agency, Ayatollah Abbas Ka’bi, the representative of the people of Khuzestan province in the Assembly of Experts, referred to the characteristics of the revolutionary seminary and said, “The Supreme Leader of the Islamic Revolution, Ayatollah Khamenei, in continuation of the efforts of Imam Khomeyni to fulfill the divine mission and goals of the seminaries has chosen the specific concept of the ‘revolutionary seminaries’ as the key term that expresses the mission and goals of the seminaries.”

The teacher in the Seminaries of Qom continued, “Imam Khomeyni, at the level of a warrior source of emulation on the path of God, who had a special interest in the upholding the commandment of God and fighting against the oppressors, used the capacity of the seminaries and clergy to fight against the oppressors and uphold the sacred system of the Islamic Republic. Thus, we have to say that the Islamic Revolution arose from the seminaries.”

Ayatollah Ka’bi said, “Wilayat al-Faqih (Guardianship of the Jurisprudent) represents the religious leadership of the society and the people as a faith community who believe in Islamic values and the teachings of pure Muhammadan Islam based on the teachings and knowledge of the Ahl al-Bayt as shaping the relationship between the ummah and Imamate. The past forty years have been driven by the guidance and support of the great Wali al-Faqih (Guardian-Jurist), which itself is the product of the Seminaries.”

Tags: Kabi Seminary Wilayat al-Faqih Islamic Revolution
Short Link rasanews.ir/201swS
Share
1
Member of the Board of Directors of the Assembly of Experts: