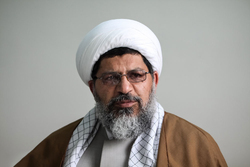 The representative of the Supreme Leader Imam Sayyed Ali Khamenei in Al-Quds Force Sheikh Ali Al-Shirazi stressed that the Islamic Republic stands by Hezbollah and all the resistance movements in the region.

In an interview with Al-Ahed News Website, Sheikh Al-Shirazi sent a message of loyalty to Hezbollah SG Sayyed Hasan Nasrallah, vowing to sacrifice souls for the sake of the Islamic Resistance.

“The entire Islamic Republic will defend Hezbollah and support all the resistance groups across the region.”

Sheikh Al-Shirazi stressed that the martyrdom of the commander of IRGC’s Al-Quds Force will never mitigate Iran’s support to the resistance groups, but that it will even augment it.