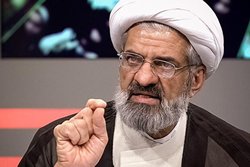 Hujjat al-Islam Jahanbozorgi referred to Israel’s goal to reach Iran’s borders and said, ‎‎“Jurisprudentially, jihad is obligatory to regain the rights of the Palestinians from the regime ‎occupying al-Quds.”‎

RNA – In an exclusive interview with Rasa News Agency, Hujjat al-Islam Ahmad ‎Jahanbozorgi, a member of the faculty of the political science department of the Institute of ‎Islamic Culture and Thought, emphasized the need for unity of the Islamic ummah against ‎the regime occupying al-Quds (Jerusalem) [Israel] and said, “In the political world, the unity ‎of the Islamic ummah on the axis of religious commonalities and the lofty goals of the ‎Islamic ummah is obligatory and essential. Imam Khomeyni has made the liberation of al-‎Quds and Palestine the ideal of the Muslims of the world and the axis of the unity of the ‎Islamic nations.”‎

Referring to Imam Khomeyni’s guidelines on International al-Quds Day and the liberation of ‎Palestine, he said, “The great architect of the Islamic Revolution said that the standard of the ‎freedom of Palestine and al-Quds must be raised by the Islamic Republic of Iran so that ‎Islamic countries can gather under this standard and all the world’s superpowers will ‎understand that they can’t dominate over the Islamic world.”‎

Hujjat al-Islam Jahanbozorgi called helping the oppressed of the world is one of the main ‎goals and ideals of Islam and said, “During the World War I, the region of Palestine was ‎placed under the authority of the Jews [by the British] and [after World War II], one million ‎oppressed Muslims were expelled from their homeland and Israel committed many crimes ‎and massacres in this region. Therefore, these crimes can’t be ignored religiously nor ‎intellectually.”‎

He said, “If the Islamic ummah doesn’t defend Palestine from a political and legal point of ‎view, the plan and objective of the Israelis to expand their territory from the Nile to the ‎Euphrates will be realized and the Zionist regime will reach the borders of Iran and the ‎neighbourhood of the Islamic system and with their aggressive nature, they will disturb Iran’s ‎borders.”‎

He considered the comprehensive support of the oppressed Palestinian people as one of the ‎strategic goals of Iran’s Islamic system and said, “The sworn enemies of the Islamic ‎Republic of Iran must be suppressed in the same land and the Islamic nations must cut off ‎the hands of the Zionist regime from the holy city of al-Quds so that the Deal of the Century ‎and the Greater Middle East Project aren’t realized.”‎

Hujjat al-Islam Jahanbozorgi said, “God has not found any way for the disbelievers to ‎dominate over the Islamic ummah and the Muslims, and if the Zionist regime oppresses the ‎Muslims, especially the oppressed people of Palestine, during this period, from the ‎perspective of Islamic jurisprudence, jihad is wajib (obligatory) to reclaim the rights of the ‎Palestinians from the regime occupying al-Quds.”‎
‎
Rasa News Agency