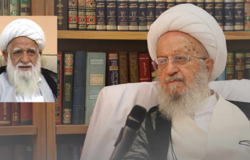 Ayatollah Sistani: The decease of the grand scholar, Ayatollah Muhammad Asif Mohseni, an outstanding scholar and thinker, the pioneer of the independence and unity combats of the noble Afghan people, was a big loss. God may show him mercy.

Ayatollah Makarem Shirazi: Sheikh Asif Mohseni belonged to the whole world of Islam and Shia, a figure whose decease brought tremendous sorrows to us. I extend condolences to all Muslim scholars and seminaries, especially Afghanistan Seminary, and pray Heaven may grant him mercy.

Ayatollah Rashshad: Ayatollah Mohseni rose and held the flag of Afghanistan independence. His decease was a sad event. I pray God may grant him the highest positions and provide his family and lovers with patience.

President of Jamia az-Zahra (Hujjat al-Islam Madani): Ayatollah Mohseni appropriated his life for the school of Ahl al-Bayt and standing against cruelty. Heaven, the Merciful, may provide him with mercy and his family with patience.