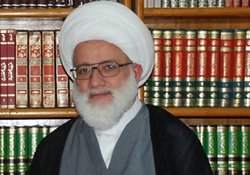 An Iraqi scholar maintained that the noble Quran is the law regulating the life of the man, moreover, it guarantees man’s felicity in the mundane world and the Hereafter.

According to the correspondent of Rasa News Agency in the holy city of Najaf, Ayatollah Sheikh Muhammad Yaqubi, an Iraqi scholar, speaking among a group of members of Fatima Zahra Lovers Institute in Baghdad, stated, “Quran should be employed as a law regulating the life of the man, as it guarantees the felicity of the man both in the mundane world and in the Hereafter.”

Pointing to Anaam Surah, he said, “God is merciful, and in case the man repents from committing sins, he will be forgiven by Heaven.”

He further noted, “In the Hereafter, man’s sins bring him sorrows and his good deeds make him happy. Thus, the youth should be appreciated and used for training the self in accordance with the  principles and methods provided by the Quran and Ahl al-Bayt (AS).”