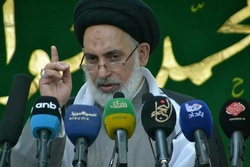 Following the desecration of Karbala, Najaf Friday prayer leader, Hujjat al-Islam Sadr ad-Din Qabbanchi, called for the resignation of the Iraqi minister of sports and youth affairs and stated that enemies attempt to tarnish the spirituality of Karbala.

According to the correspondent of Rasa News Agency in the holy city of Najaf, Hujjat al-Islam Sadr ad-Din Qabbanchi, delivering this week Friday prayer sermons in Fatima Kubra Hussainia, in response to singing and dancing ceremony in Karbala stadium, called for the resignation of Iraq minister of sports and youth affairs and said, “The Minister had definitely been aware of the desecration before the ceremony was held.”

He said, “Islam is not against freedom and football, however, opening the football competitions with singing and dancing is no source of honour.”

Najaf Friday prayer leader maintained, “What happened in Karbala is the desecration of Imam Hussain and Hazrat Abbas and similar to what Yazid did to these brothers.”

Hujjat al-Islam Qabbanchi finally said, “The seminary, preachers, poets, media and literary figures should adopt a Hussaini position to this desecration because silence over such actions will encourage the enemy to carry out his schemes with more confidence.”