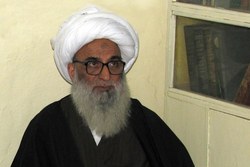 A source of emulation called for putting aside the differences on Hajj days and stated that the preservation of unity on these days is highly significant.

According to the correspondent of Rasa News Agency in the holy city of Najaf, a group of Hajj pilgrims visited Ayatollah Sheikh Bashir Najafi. In the course of the visit, Ayatollah Najafi said, “This pilgrimage has many different positive effects on the man.”

Saying that the preservation of the unity in Hajj is important, this source of emulation pointed out, “Differences should be put aside, and Muslim ought to stand united in one line. Muslims all are supposed to foil the ploys made for tarnishing the reputation of Islam.”

Finally, Ayatollah Najafi maintained, “Missionaries and clerics of Hajj caravans are expected to grasp the opportunity and let the Hajj pilgrims know the religious rules and orders, moreover, they should establish communications between the believers and Najaf Seminary.”