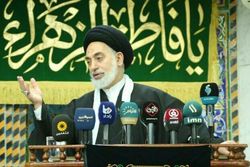 Najaf Friday prayer leader maintained, “The power and dominance of the US have been undermined and it has no power to launch a war alone.”

According to the correspondent of Rasa News Agency in the holy city of Najaf, Hujjat al-Islam Seyed Sadr ad-Din Qobanchi, delivering this week Friday prayer sermons in Fatima Kubra Hussainia, commending the IPMF for arresting 25 heads and businessmen active in the business of wines, gambling, girls and youths, stated, “This is a valuable act for which the prime minister ought to thank the IPMF.”

He said, “In the fight against the ISIL (a.k.a ISIS or DAESH) we managed to achieve victory. The Iraqi nation, due to its association with the sources of emulation and scholars and its religious roots, has the capability to win any soft warfare.”

In another part of the sermons, he said, “The power and dominance of the US have been undermined, and it is unable of launching a war alone, therefore, its plans are not welcomed by its allies as before.”