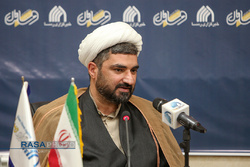 The chairman of Rasa News Agency assessed the ethnic diversity in Qom, created by religion and clerics, an opportunity.

RNA - The chairman of Rasa News Agency, Muhammad Mehdi Muhaqeqi, in the course of a visit of RNA by the director of the Islamic Propagation Organisation of Qom Province, talking on the identity struggle in the modern world, said, “Identity struggle is an important issue of our time; governments seek to employ those factors [education, media and culture and etc.] contributing to the creation or change of identity of their societies, because together with lifestyle and family, identity is a significant factor impacting states’ policies.”

This activist of the Islamic Revolution Front, saying that the framework formed in our country is based on the Iranian-Islamic identity, reminisced, “Qom is a city with a diversity of culture, ethnic groups and people with different nationalities. Different from some similar cities in the world, the said diversity has been created thanks to religion and clerics. This diversity is never a threat, but an opportunity that should be seized by those working in the field of culture.”

Calling the abstention from provoking confrontation among the data-x-items contributing to the development of identity a media strategy, he maintained, “Representatives and thinkers from ten countries are present in Qom, and it makes an invaluable opportunity. In addition to its organizational responsibilities, the Islamic Propagation Organisation should attend to this important issue.”