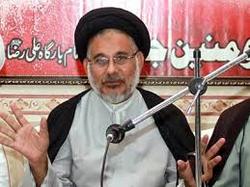 The prominent Pakistani Shiite cleric condemned the anti-human crimes of the Indian government in Kashmir.

RNA – Seyed Hassan Zafar Naqavi, the prominent Pakistani cleric and the active member of the Association for Pakistani Muslims’ Unity, attending in a ceremony, criticised the silence of the heads of Muslims states over the situation of Kashmir people.

Describing the conditions of Kashmir people as gravely terrible, Hujjat al-Islam Naqavi said, “Leaders and people of Kashmir are imprisoned in their homes and no one knows what is going to happen.”

Mentioning that the extremist government of India doesn’t know Kashmir people, he stated, “Kashmir’s critical issue can only be resolved by its people and there is no other option in this regard.”