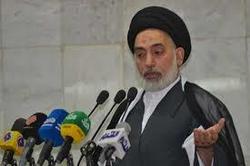 Najaf Friday prayer leader maintained that the Arab-American axis has failed in terms of military and security affairs in the region.

According to the correspondent of Rasa News Agency in the holy city of Najaf, Najaf Friday prayer leader, Hujjat al-Islaam Sayyed Sadr ad-Din Qabbanchi, speaking among a group of members of the Islamic Supreme Council of Iraq, pointed out that Iraq is attempting to strengthen its position and to return to the world society.

He added, “The Arab-American axis has faced different military, security and cultural defeats in the regions.”

It is necessary to note that, prior to the said meeting, Najaf Friday prayer had commended the positions of the Iraqi foreign minister over the US massages on the IPMF and reiterated that the government and nation of Iraq won’t follow the US policy of imposing sanctions against the Iranian nation.