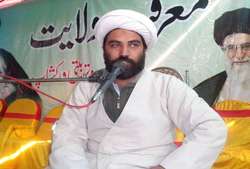 The spokesman of the Pakistani Association for Muslims Unity said that the US policies are against Pakistan and the world of Islam and this country is unreliable.

RNA - The spokesman of the Pakistani Association for Muslims Unity, Hujjat al-Islam Maqsoud Alid Domaki said that the US policies are against the region and Muslim nations.

“It is the time that Muslim countries extend the hand of friendship to each other and oust the US and its allies from the region. The issue of Kashmir should be resolved in accordance with the national and religious principles”, he continued.

Finally, Hujjat al-Islam Domaki stated, “Given what the US did towards Palestine, this country can’t be trusted again over the issue of Kashmir as a third party. The US is unreliable and its policies have long been against Pakistan and the world of Islam.”

0
0
Answer
Please post news and videos about Mahdawiya knowledge and exit the show's appearances.
good luck
Please type in your comments in English.
The comments that contain insults or libel to individuals, ethnicities, or contradictions with the laws of the country and religious teachings will not be disclosed