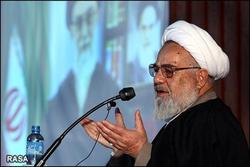 The member of Qom Seminary’s society of teachers, pointing to the defeats of the US and the West in the fight against Iran, stressed that their evil policies won’t halt Iran and Iranian people in their track.

RNA - The member of Qom Seminary’s society of teachers, talking to Rasa News Agency, pointed to the wise leadership of the supreme leader of the revolution in the last 30 years and the impugning if the enemies’ strategies by him, and then said, “It seems that frequent failures have rendered Trump and Americans frustrated.”

Ayatollah Mamdoohi added, “The evil policies of the US will bear them no fruit as they didn’t in the past. The Iranian people are supposed to know their leader and their stupid enemies. The absurd actions taken by the US will never strike the high position of the leader and the sources of emulation.”