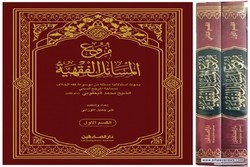 The office of Ayatollah Yaqubi published and distributed a new book, “Subcategories of the Jurisprudence”.

According to the correspondent of Rasa News Agency in Najaf, the book, “Subcategories of the Jurisprudence”, composed in two volumes and 360 pages, recently authored by Ayatollah Yaqubi, an Iraqi scholar, was published and distributed.

The book, dealing with jurisprudential issues and subcategories, is collected and arranged by Ali Jamil al-Mowazeni.

The introduction of the book reads, “The Jurisprudence of Difference (Fiqh al-Khilaf) is an area rarely dealt with in Najaf Seminary. It isn’t confined to the causes of issues, yet, it deals with different views, and the causes of the differences and disputes over disparate issues are discussed.”

The book also mentions, “The issues dealt with by the Jurisprudence of Difference are superior to the ones discussed by logics, as the latter is confined to reasoning on the rules appertaining to different issues, however, the former develops the discussion and deals with some more views.”

The distinguishing characteristics of the books are:

Providing a thoroughgoing introduction, covering the subcategories of Fiqh, composed by Ayatollah Yaqubi;

Initially introducing the topics implicitly dealt with in the book, the issues that benefit readers and researchers and let them choose their favourite categories;

Presenting a summary of the issues dealt with by the Jurisprudence of Difference, including the main issues, footnotes and etc.;

Omission of the moot words, expressions and sentences;

Top-down arrangement of the issues, and not based on the jurisprudential topics.