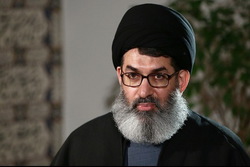 The Cultural Deputy of the Iraqi Popular Mobilization Forces stated, “The Power of the Resistance Front will turn the Deal of the Century into the Slap of the Century and this Front has been protected by God, the Sublime.”

Pointing to the downing of the US drone by the IRGC, he pointed out, “Donald Trump has been terrified and he is unable to respond to the targeting of the said drone.”

The Cultural Deputy of the IPMF stressed, “If the US attacks Iran, all its bases and interests in the region, as well as the palaces of the House of Saud and Al Nahyan family will be struck by the Iranian missiles.”

It is noteworthy that the second conference of the Resistance Youth held on commemorating the Bahraini martyrs and the death of the Deal of the Century, was held in Qom in the presence of the youth coming from 60 countries, and Sheikh Isa Qasim and Sayyed Hashem al-Haydari spoke in the meeting.