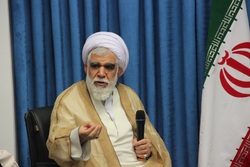 The secretary general of Ahl al-Bayt World Assembly, mentioning that the deal of the century is the ultimate betrayal of the century, said that Muslim scholars and countries should discharge their own responsibility against the enemy’s plot.

He added, “Imam Khomeini warned against the plots of the UK about 70 years ago, he stood against them through the determination of a day as the Quds day. An effect of this act and the march on this day is the frustration of the plots on striking a compromise between Arabs and Israel.”

“The march on this day is a crushing blow to the heads of the US, Israel and some Arab regimes. The deal of the century is the ultimate betrayal of the century. The expansion of the domain of Israel through ousting the Palestinians from their own land is a part of this plan”, he further mentioned.

Finally, Hujjat al-Islam Akhtari said, “All the people are responsible regarding the issue of Israel, and all should discharge their tasks in standing against such plans. We shouldn’t let them push Palestine into oblivion, as we are here to hinder such plans.”

Israeli Occupation and the Way Ahead