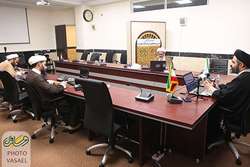 On May 19th, an academic conference entitled “al-Quds and Palestine in the Mirror of the ‎Jurisprudence of Resistance” was held at Rasa News Agency’s headquarters in Qom. ‎

RNA – On May 19th, an academic conference entitled “al-Quds [Jerusalem] and Palestine in the Mirror of ‎the Jurisprudence of Resistance” was presented by Hujjat al-Islam Dr. Sayyed Sajjad Izdehi, ‎the head of the Research Institute of Islamic Systems at the Islamic Research Institute for ‎Culture and Thought and Hujjat al-Islam Dr. Zabihollah Na’imian, a member of the political ‎jurisprudence department at Baqir al-Ulum University, in the conference hall of Rasa News ‎Agency in Qom. ‎

At the beginning of this conference, Hujjat al-Islam Alireza Fallahi, the secretary of the ‎conference, referred to the meaning of the prayer of the 25th month of Ramadhan, the ‎scientific secretary of the conference said, “I take the coinciding of this conference with the ‎‎25th day of the holy month of Ramadhan as a good fortune because this prayer makes our ‎policy about the Palestinian issue and the Islamic Resistance very clear and transparent. In ‎today’s daily supplication tawalla (loving the Ahl al-Bayt) and tabarra (disassociation with the ‎enemies of God) are beautifully requested. In this prayer we say to God, ‘Oh God! On this ‎day, make me among those who love Your friends; and [on this day], have enmity for Your ‎enemies; and [on this day], following the way of Your last Prophet; Oh, the Guardian of the ‎hearts of the Prophets.’”‎

He continued, “Therefore, the issue of supporting Palestine and the Islamic Resistance Front ‎can be used from the general and certain principles of our religious and narrative texts. On ‎this basis, Ayatollah Khamenei said, ‘In the Islamic Republic, the issue of Palestine is not a ‎tactical issue for us, it is not a political strategy, it is a matter of opinion, it is a matter of ‎heart, it is a matter of faith.’”‎
‎ ‎
Continuing the conference, Hujjat al-Islam Izdehi, in response to the question of whether the ‎jurisprudential requirements accept our current support for Palestine, said, “The ahadith ‎‎[narrations] tell us that we must defend the oppressed and fight the oppressors. According ‎to these narrations, if a Muslim is oppressed in a corner of the world, we are obliged to ‎defend him. There are several principles in jurisprudence that confirm this, such as the ‎principle of ‘nafi sabil’ [denying the domination of unbelievers over believers], according to ‎which the unbelievers cannot dominate over the Muslims, and if this happens, action must ‎be taken to eliminate it. The meaning of domination in this principle is both cultural, ‎geographical and economic domination and the occupying Zionist regime engages in all three ‎of these forms of domination and therefore, we have a duty to confront this regime so that ‎its domination is eliminated.”‎

Referring to the reality of Israel, Hujjat al-Islam Na’imian said, “The reality of this regime is ‎that there is a dichotomy that we must not ignore. One aspect is that this usurping regime ‎has committed crimes against Palestine and the other aspect is that it represents the global ‎arrogance. The anger that we have toward Israel must not surprise us regarding the second ‎aspect. If we look at Israel in this way, the Islamic Resistance is defined by the same ‎situation, that is, part of the nature of the Islamic Resistance is defending Palestine against ‎the invasion and attack of the occupying regime, and the other part is the Islamic ‎Resistance’s resistance to the global arrogance.”‎
‎
Rasa News Agency