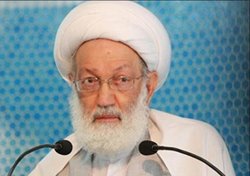 The spiritual leader of the Shi’ah majority in Bahrain said that citizens are not ‎required to abide by a decision made by the Ja’fari Endowments Directorate ‎banning the recitation of the Quran, supplications and mourning ceremonies ‎through loudspeakers during the month of Ramadan.‎

RNA – Ayatollah Isa Qasim, the spiritual leader of the Shi’ah majority in Bahrain, stated that ‎citizens are not required to abide by a decision made by the Ja’fari Endowments Directorate ‎banning the recitation of the Quran, supplications and mourning ceremonies through ‎loudspeakers during the month of Ramadan. He called on the Endowments Directorate to ‎reverse its decision.
‎
In a statement issued on Thursday (April 23, 2020), His Eminence said, “In regard to the ‎decision that the Endowments issued to prevent the recitation of the Quran, supplications ‎and mourning ceremonies through loudspeakers during the holy month, I do not see that ‎any believers should abide by it, and this is what’s good and what is surely required. The ‎Endowments better withdraw its decision because it has a negative impact on the hearts of ‎citizens, and because it entails harmful interference in the rituals of religion.”
‎
‎“The sounds of loudspeakers that are not above the moderate limit cause no harm to ‎anyone, and they have been used for many years,” he added.
‎
Ayatollah Qasim concluded by stressing that “In any case, the step is suspicious and a ‎foretaste of further interference, and blocking this door is necessary.”‎
‎
ABNA

Member of the Faculty of the Research Institute ‎of Ethics and Spirituality:‎

The martyrs are source of pride for Iran