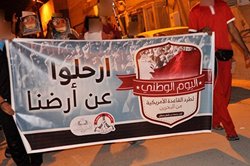 The head of the political bureau of the February 14 Youth Coalition announced that the ‎Bahraini people will not accept any foreign military presence in the country.‎

RNA – On the occasion of the National Day of the withdrawal of American troops from ‎Bahrain, Ibrahim al-Aradi, the head of the political bureau of Bahrain’s February 14 Youth ‎Coalition, said, “The presence of American troops in the country is a major obstacle to ‎democracy and is in support of the Al Khalifah regime.”‎

According to the Manama Post website, he blamed the presence of American forces in ‎Bahrain for covering up crimes and human rights abuses by the Al Khalifah regime.

He added, “The presence of American forces in Bahrain is illegal and the purpose of having a ‎foreign military base in the country is to support a dictatorial regime and the Bahraini people ‎don’t accept any foreign military presence that harms the security, sovereignty and ‎independence of this country‏.‏‎”‎

The United States Fifth Fleet in Bahrain is on an island near Saudi Arabia and hosts more than ‎‎7,000 American troops. The Isa Air Base on the island also hosts American forces and ‎reconnaissance aircraft.‎
‎
Rasa News Agency