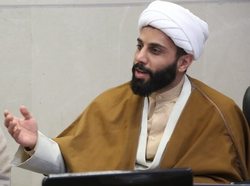 Hujjat al-Islam Aref Ebrahimi said, “The Iraqi Islamic Resistance Front is preventing the United States from achieving its sinister and colonial goals in this country and therefore, they are seeking to remove this obstacle.”

RNA – Iraq is considered one of the important countries in the region that the colonial countries and the kings of different periods have been greedy for. At the present time the regional media organizations are reporting on potential military action by the United States against the Iraqi people in various news outlets. The news of this issue has been met with both an internal and external reaction from Iraq and all sides are forbidding the Americans from initiating any new adventure.

Hujjat al-Islam Aref Ebrahimi, a researcher in the Islamic Seminaries of Qom, has written a review of this important issue in the region, a summary of which will be presented to the readers below.

“Operation New Dawn” is the name of the operation that the Americans put in place to bring about a fundamental change in Iraq in September 2010. This operation can be examined from the following two dimensions.

1. The root and cause of the decision of the White House leaders to implement this plan
2. Iraqi officials’ positions on Operation New Dawn

The existence of weapons of mass destruction were an excuse for the United States to invade Iraq in 2003. They planned to plunder the country’s national wealth, such as oil, and to control and monitor the activities of Iraq’s neighbours, such as the Islamic Republic of Iran, Syria and Turkey and in conclusion, they considered the division of Iraq into three parts: Kurdish, Sunni and Shi’ah regions.

It was later revealed that there were no weapons of mass destruction in Iraq. Accordingly, the presence of American troops in Iraq was meaningless, so most of the American troops left Iraq under pressure.

The Americans faced serious challenges in continuing their presence in Iraq and achieving their other sinister goals in Iraq. White House officials used the “create a problem and provide a solution” system. The system is such that the Americans themselves secretly created a major problem, such as the invasion of Iraqi territory by the Daesh terrorist organization and they themselves have been looking for a solution to curb it so that they can stay in Iraq longer.

The Americans are currently pursuing a plan to eliminate the Popular Mobilization Forces (PMU) in Iraq. They began this plan in 2019. That is why during 2019, they repeatedly attacked various military bases belonging to the PMU. killing a number of their members. They began with the assassination of Abu Mahdi al-Muhandis, a senior member of the PMU in Iraq, and Haj Qasem Soleymani, the commander of the Quds Forces and a key supporter of the PMU.

Iraqi officials have been divided into three parts over US action to put maximum pressure on PMU.

The first group consists of some officials, most of whom are members of Iraqi Kurdish factions, who openly and covertly support any action taken by the Americans, and in fact seek an opportunity to separate Kurdistan itself from Iraqi territory, even at the cost of sacrificing their children. An example of this is the recent coup d’état by Masoud Barzani, the former President of Iraq’s Kurdistan Region, and the lack of participation of parties in the parliament’s decision in recent months to expel Americans from the country.

The second group consists of officials who are indifferent to what is happening in Iraq and sometimes take sides with the United States and sometimes with their own people. Most of these people are members of the Sunni factions and parties, whose betrayal is far less than that of the Kurds. In regard to the United States’ confrontation with members of PMU, they take a neutral stance and sometimes support the Americans under various pretexts and unnecessary expediencies.

The third group consists of officials who strongly oppose the presence of the Americans and strongly support the Islamic Resistance Front, and who are in line with the national interests of Iraq and don’t allow the plundering of the national wealth of the Iraqi people. These people are often Shi’ahs and some members of the Sunni factions and parties fall into this category. In the past few months, the lawmakers have passed a law calling for the expulsion of the Americans and calling for the preservation of Iraq’s territorial integrity and sovereignty.