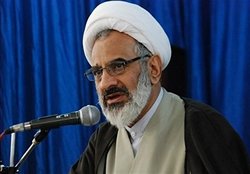 Hujjat al-Islam Haji-Sadeqi announced the establishment of a health and spirituality camp in the IRGC with the participation of the clergy to confront the Coronavirus.

RNA – Hujjat al-Islam Abdollah Haji-Sadeqi, the representative of the Supreme Leader of the Islamic Revolution in the Islamic Revolutionary Guard Corps, said that our Sacred Defence [Iran-Iraq War] had begun but wasn’t ending and that its pages would be changed and added, “What is happening now in the country against Coronavirus is considered as a sacred defence for humanity and in this crisis, all apparatuses have entered the battlefield with religious empathy, cohesion and spirit.”

He emphasized that the IRGC, like the rest of the apparatuses of the country, has been at the forefront of confronting the disease since the early days of the Coronavirus outbreak in mid-February, adding, “Because the IRGC is targeting the people’s belief in God and helping the people. The best example of protection is service to the people.”

Hujjat al-Islam Haji-Sadeqi said, “To this end, the representative of the Supreme Leader in the IRGC, in partnership with the IRGC and Basiji seminarians, has established a spiritual health centre with four goals – assisting society, assisting the ill in health clinics, creating happiness and trying to help the families of the sick and those who have passed away in order to give them morale as well as preserving the dignity of the deceased believers by performing the legal stages of shrouding and burial.”

He added that the camp coordinates with mosques, resistance bases and seminaries and works closely with the Ministry of Health and Medical Education, municipalities and the identification of needy families.

H Hujjat al-Islam Haji-Sadeqi said, “The camp is constantly monitoring the situation with the sub-headquarters and the people are assured that we will stand alongside them to the end.”