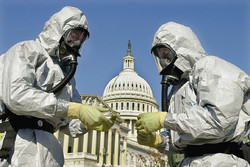 The coronavirus is spreading here in the United States in an alarming fashion and the government is now moving into crisis mode. Nearly 15,000 people have been tested positive as of today, Friday, and it's increasing exponentially.

RNA - The coronavirus is spreading here in the United States in an alarming fashion and the government is now moving into crisis mode. Nearly 15,000 people have been tested positive as of today, Friday, and it's increasing exponentially. So the question becomes what went wrong? The US had plenty of warning on this. The Chinese figured out it was a problem back in January. And at that point, measures could have been taken that would have kept the problem very, very small. And that didn't happen.

I think we can look at this from a couple of different standpoints. The first, of course, is that the US leadership is completely incompetent and reckless. And from the incompetence standpoint, clearly, Trump has been completely at a loss trying to politicize this thing and blame China without taking the kinds of measures that would protect the American people.

The US healthcare system is a world class joke. We're the only advanced industrial country that doesn't have some form of universal health coverage. So nobody in the United States except for a handful of rich and very well insured people is in a position to easily go and get a coronavirus test. And there aren't any test kits. For some reason, despite the problem being evident in January, no test kits were made for the United States. And so the United States is basically last in the world in responding to this.

So that's one aspect of the problem. But the other aspect, which is completely blacked out and censored from the corporate-controlled mainstream media here in the West, is that this crisis is a lesson to the entire world that we need to address the problem of biological weapons. This may or may not be a deliberate biological weapon attack; it may or may not be an accidental release of a biological weapon. There are strong arguments for both possibilities. And I think the arguments for it being a deliberate release as an attack on China by the United States to try to use this hybrid fifth generation warfare and economic warfare to prevent China from overtaking the United States as the world's leading power -- previous similar attacks on China using SARS and bird flu and so on and so forth have been ongoing for years, and when SARS was used against China by the United States, it didn't spread from China --  and it's very likely that the same people who did that once again hit China with this COVID-19 virus, as part of Trump's ramped-up economic fifth generation hybrid war on China.

Likewise, the severity of the outbreak in Iran suggests that the Americans and/or their partners the Israelis, who often play a leading role in these kinds of extreme events, may very well have been in this and they may have deliberately attacked Iran.

Now it's spreading worldwide, presumably because the people behind this simply were so reckless that they either didn't take into consideration the likelihood of this kind of blowback, which is always there with any use of bio-weapons, or perhaps they figured they could use the worldwide economic crisis for their own ends. But this is of course still a hypothesis and there's lots of circumstantial evidence for this. I wrote a piece about this at the Unz Review. But whether or not it's the case, we know that one of the greatest threats to humanity is the ongoing development of biological weapons, especially ethnic-specific—or the makers intend them to be ethnic-specific—biological weapons, but then they can mutate and hit other ethnicities as well. There has been all sorts of research on this.

The United States has been using biological weapons regularly for the past 50 years. It dropped hundreds of thousands of germ bombs with cholera and plague on Pyongyang alone during the Korean War, and hundreds of thousands or even millions elsewhere all over China and Korea. And, and this is explained in the book This Must Be the Place[: How the U.S. Waged Germ Warfare in the Korean War and Denied It Ever Since] by Dave Chaddock.

The US also attacked its own Congress in 2001. We now know that the anthrax attacks came from within the US biological weapons community, and it was presumably part of the September 11 anthrax false flag operation as Dr. Graham McQueen has explained in his book, the 2001 Anthrax Deception.

So we need to put some teeth in that biological warfare treaty, get huge inspections, international control over this issue, shut down all bio-warfare research labs and everybody else remotely close to that field. That's the only way we're going to save the world from not only this pandemic, but vastly worse ones that are upcoming very soon in the future if we don't act now.

Sanctions failed to force Iran to give in to US pressure