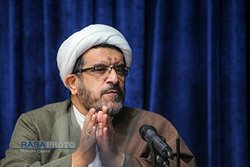 In an interview with Rasa News Agency, Hujjat al-Islam Abdul Rasul Hajari announced the start of specialized sessions on the Islamic Revolution’s discourse at the seminary of Faiziyah school in Qom, and said, “These series of conferences which coincide with the Fajr decade of the Islamic Revolution will start on Sunday, February 09, at Faiziah School.”

“In the conference Hujjat al-Islam Najaf Lakzaee, the president of the Islamic Sciences and Culture Academy, will have a presentation on contemporary social-political events of Iran. Abd al Wahhab Forati, the faculty member of the Research Institute for Islamic Culture and Thought, is the other speaker of the conference”, Hajari said

Hajari concluded, “On Monday February 10 the conference will continued with the speech of hojjat al-Islam Khosropanah on the analysis of the threats to contemporary Religious Research Studies."