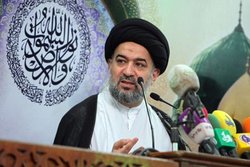 The representative of Ayatollah Sistani criticized Iraqi officials for not attending to people’s problems and the untackled corruption in the country.

RNA - The representative of the Grand Ayatollah Sistani and the custodian of Imam Hussain (AS) holy shrine, Hujjat al-Islam Sayyed Ahmad Safi, delivering the sermons of this week Friday prayer in the courtyard of Imam Hussain (AS) holy shrine, strongly criticised the Iraqi officials and said, “Why are still people fraught with problems? Where is the wealth of the country going?”

Mentioning that each day some news is distributed on the plundering of heavy amounts, he noted, “For several years we have been calling for curbing the corruption, yet it is a still ignored.”

Hujjat al-Islam Safi maintained, “Iraqi youths are in a poor economic situation though they have several capabilities.”